Everyday I have the Blues.

American Roots storyteller and singer Rambling Steve Gardner, performs "The Gallows Pole" at the Blues For Blues" Festival held in Yokohama, Japan Feb. 2012. The festival was held to raise money and awareness for the continuing recovery efforts being made in Tohoku, Japan after the March 11, 2011 Earthquake and Tsunami.

Rambling Steve Gardner performed at the Yokohama Union Church while several other venues from YIS to the British House also hosted performances. 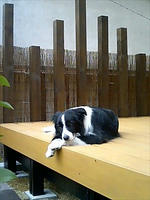